Appendix A – Brief Description of ADFA

‹ Appendices up Appendix B – Scope of Research and Methodology ›

ADFA is one of the ADF’s training establishments.

Its stated purpose is to:

It is the only tri-Service military establishment in Australia.

In 1959, investigations began into the desirability and feasibility of integrating training for the three parts of the Australian Defence Force: the Navy, Army and Air Force. A specific plan was formalised in 1970 and in July 1977 the Australian Government agreed to establish ADFA in Canberra, adjacent to the Royal Military College, Duntroon.

In May 1981, the Australian Government and the University of New South Wales (UNSW) signed an agreement that UNSW would establish a College within the Australian Defence Force Academy.

Since 2001, ADFA has been placed within the Australian Defence College (ADC) command. The Commander, ADC, is also responsible for the command of the Centre for Defence and Strategic Studies and the Australian Command and Staff College, in addition to the Capability and Technology Management College (also located at ADFA), the Centre for Defence Leadership and Ethics (located at ADFA), the Defence International Training Centre (in Melbourne), the Defence College Chaplains College (near Albury but under direct command of Commandant ADFA) and the Joint Warfare, Doctrine and Training Centre (at Williamtown near Newcastle). Australia’s Federation Guard is located at ADFA and is under the command of the Commandant of ADFA.

In 2009, the Australian Government and UNSW entered into a renewal of their agreement which extends the contractual agreement to 2023.[443]

ADFA is both a military college and academic institution. Through its agreement with UNSW, it provides cadets with an opportunity to gain an undergraduate university degree, while also undertaking military training with the ADF. Prospective cadets must apply to both UNSW and the ADF for admission to ADFA.

Cadets must complete Academy Military Education and Training (AMET). This is undertaken each year and covers topics such as leadership, military communication, equity and diversity, military law, physical and recreational training and weapon training. Its framework has three key components: military skills (foundation military skills training), leadership philosophy (aimed at developing the character of cadets through theory lessons, practical exercises and experiential opportunities) and defence studies philosophy (the purpose of which is to develop an understanding of and pride in ADF history, customs and traditions).

AMET is an evolving program and its content is the result of input from a range of staff members over time. The AMET program development has also experienced problems with development and delivery due to staff shortages or frequency of staff turnover. Prior to 2009, the Chief Instructor had been filled only on 12 months tenures and the Officer Commanding Training and Management Section position had been vacant for a period of time. Since 2009, work has been undertaken to stabilise, document and provide a framework for the AMET Program. The Review recognises that there is current development work in progress which is in the conceptual stage only. Staff selection, adequate staffing and tenure stability will ensure that the AMET Program is able to be developed, delivered, assessed and adjusted to achieve the ADFA stated purpose.[446] 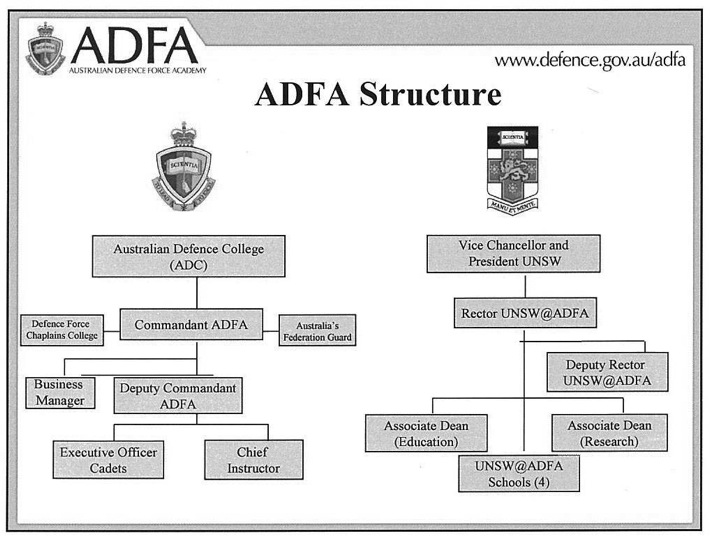 In addition to the academic studies and AMET outlined above, cadets must undertake SST. This generally occurs in blocks at the beginning, middle and end of each year.[449] This training is undertaken at various locations, depending on the service and the nature of the training. For example, Army cadets may undertake SST at RMC Duntroon and other army locations; Navy cadets at shore establishments and on ships; and Air Force cadets at Sale, Victoria.[450]

The majority of cadets enter ADFA directly following school or a ‘gap year’.

All Navy midshipmen complete the Navy Officer Year One Program (NOYO) prior to commencing at ADFA. The first part of NOYO, the New Entrant Officer Course (NEOC), is a 22-week induction course which teaches cadets basic mariner and military skills. Following NEOC, midshipmen undertake further training throughout the fleet, the nature of which depends on the primary qualification that they will study at ADFA.

Following ADFA’s three-year program, most cadets (Navy, Army and Air Force) undertake further training with their own service. For cadets from the Army, this involves training at RMC Duntroon. Cadets from the Navy and Air Force complete specialisation training. Cadets studying four-year engineering degrees remain at ADFA for a fourth year to complete their qualification. During this fourth year, they are part of the ‘advanced student squadron’.

The vast majority of cadets come to ADFA from New South Wales (27%) and Queensland (26%), followed by Victoria (17%). Approximately two-thirds of cadets were living in a metropolitan centre before attending ADFA, with the remaining third coming from country/rural areas.

Prior to attending ADFA, 53% of cadets attended a private school and 41% attended a public/state school. Previous surveys of first-year cadets have found that around three quarters attended co-educational schools and the vast majority had been day students rather than boarders.[452]

All ADFA cadets are paid a salary package between $35,661 and $50,344 per year. Cadets do not have to pay tuition fees and the cost of most textbooks is covered.

In 2011, of the full-time permanent 105 military staff positions at ADFA, 14 were filled by women (approximately 13%). This represents a low over the past four years, as the male to female military staff ratio at ADFA has remained relatively static in the preceding three year period 2008-2010 at 17%, 19% and 18% respectively.[453]

Over the past five years, the senior leadership roles at ADFA were largely occupied by men. Of the four executive positions (Commandant, Deputy Commandant, Executive Officer and Chief Instructor) within the organisation, a woman has held the position of Commandant once (2009) and there was a female Chief Instructor at ADFA in 2009 and 2010.[454]

At the next management level of Officer Commanding and Divisional Officer, representation of women has been much greater: 81% and 35% respectively over the last five years. On the data available for this period, however, ADFA has not had a female Academy Sergeant Major or a Squadron Sergeant Major. Around 14% of Divisional Senior Non-Commissioned Officers have been females, notably lower than the 21% female cadet population.[455]

In relation to cultural/ethnic diversity, only a small minority of ADFA’s first-year cadets have a non-English speaking background. However, this percentage has increased over the years.[457]

There has been significant leadership turnover at ADFA in recent years. Since February 2006, there have been six Commandants (including two acting Commandants).

The average tenure of military staff at ADFA over the last five years is 1.49 years (or 18 months).[460] One ADFA Personnel Officer estimated that the staff turnover rate has been 43% per year over the past five years.[461]

There are 23 accommodation blocks at ADFA. Each multi-story block houses one division, comprised of up to 47 cadets. All divisions are tri-Service. Each Divisional Building is built around ‘sections’ of eight cadets. Each floor has multiple corridors with clusters of four individual rooms running in each corridor. The design of these buildings has been described as ‘cluster-plex’ accommodation.[463]

Cadets have their own rooms, and share bathroom, laundry and recreation facilities with other cadets. First-year cadets live in single-sex corridors, with living arrangements integrated in second and third years.

Each division’s block includes an office for a Division Senior Non-Commissioned Officer (DSNCO). Divisional Officers (DOs) also have offices, although these are not located in accommodation blocks.

ADFA facilities are currently being refurbished. This involves mainly cosmetic changes to accommodation buildings, including some increase in common area space, and does not include any structural changes to cadets’ accommodation.

[448] An additional 39 (3.6%) ADFA cadets are from overseas. Percentage figures may not total 100% due to rounding: RADM J Goldrick, ‘The Australian Defence Force Academy’, Presentation, provided to the Review, 6 May 2011.